We’re back with Interview with a Zinester! This time, we’ve got Julia Lipscomb, a bi-coastal zinester that has volunteered at several zine libraries, including the Zine Archive and Publishing Project (ZAPP) in Seattle and currently ABC No Rio. We’re excited to have her table at the zine fest this year! Let’s hear what she has to say:

(psst, if you haven’t checked out our last interview with new zinester Devon Spencer, you can see it right here!)

1. Give us a short description of yourself and the work you do (including any zine samples if you have them!).

I write personal zines! I’ve been writing zines since 2004, and honestly my zines have gone through as many phases as I have. In high school, I wrote about music. In college, I was writing poetry and chapbooks and sometimes zines about archiving from my internships. After college, zines proved to be my only recession-proof skill. How NOT to Write a Resume is a comic published after sending my resume to over 200 positions and getting rejected by 30 interviews. I think it’s important for zines to come full circle. When you evoke difficult feelings in zines, it is the responsibility of the zinester to start in a happy place and end in a happy place. Whether that’s framed by poetry, comedy or another rhetorical device is up to the zinester. No matter what I write about, it’s always personal.

Currently I’m pursuing a Masters in Arts & Cultural Management at Pratt Institute. Basically I love working in nonprofit arts organizations so much that I decided to study them! My classmates and professors are very inspiring. 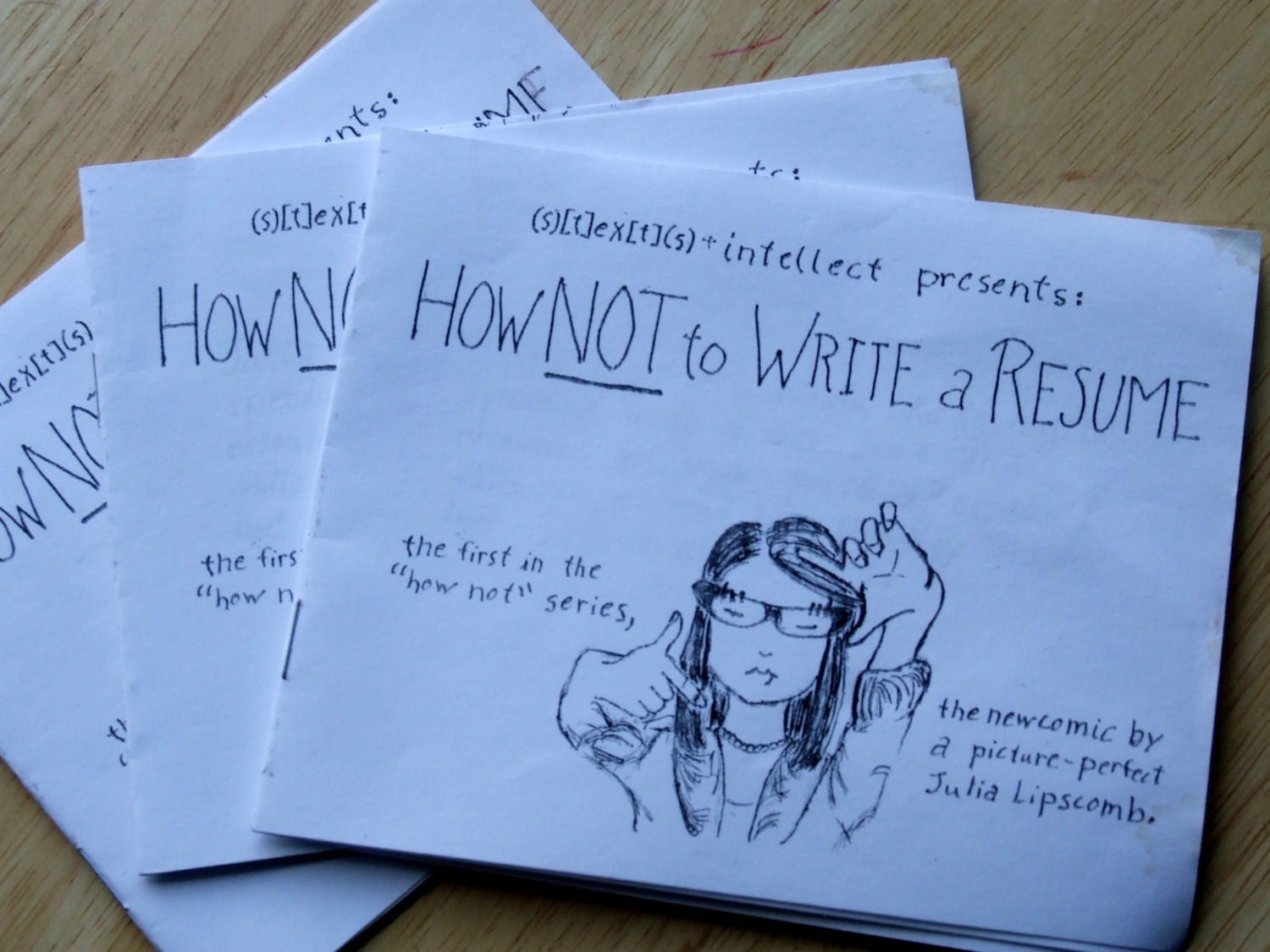 2. How did you get introduced to zines? Were you influenced by anyone? And what was your seminal zine moment?

Like most zinesters, I started publishing zines before I even knew what a zine was! My seminal zine moment was visiting the Zine Archive & Publishing Project (ZAPP) in Seattle the summer after graduating high school. In Spokane, Washington, where I grew up, I could count the number of zine publishers on one hand. At ZAPP, there were thousands – and by thousands, I mean twenty thousand – zines in every genre imaginable (or unimaginable). It was unreal and definitely humbling. I knew I had to step up my game.

Growing up in Spokane, I was influenced by local writers and cultural leaders, by people who included zines in a larger community of artists, musicians, writers, publicists, record labels, and other innovators doing their thing independent of profit. Local journalist, Isamu Jordan, was publishing a weekly music column in the alternative publication, 7, and interviewing every musician in the community – I was very inspired by that and started interviewing musicians myself. Sadly, Isamu passed away suddenly last September and I can’t think of my earlier beginnings without remembering him.

Anyone regardless of gender who uses zines to protect and defend their political, economic and social rights is doing feminist zine-making, in the broadest definition of the term. I also believe that keeping a space open for zinesters – whether for a one-time event, open hours library or in collaboration with another arts venue – is inherently political. That’s what makes public spaces for feminist zine-making so difficult – and necessary.

Most of my zines are more implicitly feminist, though I can’t deny once publishing a zine titled sex + intellect aimed at sexism in academic circles. My latest zine, One Ear Bud Free, is a work zine inspired by other work zines like Dishwasher and Temp Slave. One Ear Bud Free is an exposé of all of the temp jobs and unpaid internships I worked and the music that got me through them. You may recognize a few jobs where being a woman or having a speech disability simply got in the way of my performance or chance at long-term employment. 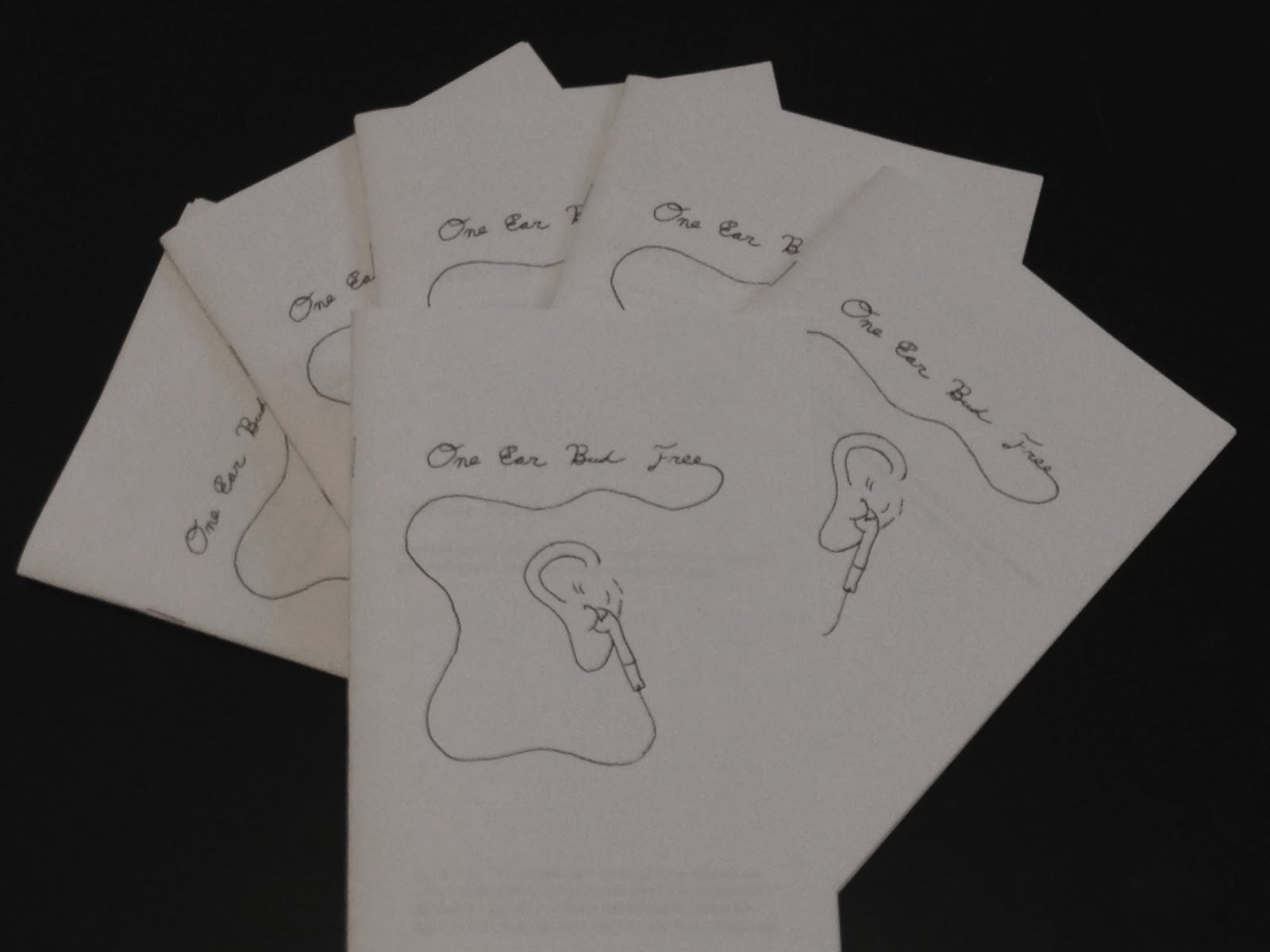 I’m super inspired and excited for NYC Feminist Zine Fest, and I want to write more feminist zines! Lately this past season I’ve received a lot of criticisms for being a woman who watches football by both men and women alike, so I think a zine about football is in order. Go hawks!

A friend from ZAPP in Seattle makes these beautiful silkscreen zines and runs Blue Dot Prints. I also love Gina Siciliano’s zines that I picked up in Portland. She draws these beautiful, incredibly-detailed comics and her narratives are very moving and relatable. I’m attracted to more “art” zines, though I do have a soft spot in my heart for grainy offset zines found in old school punk zine archives.

This is my favorite question of all because I had to think the hardest on it. I keep thinking of the broiler underneath conventional ovens. The broiler is the best way to make the yummiest open face grilled cheese sandwiches. You can make something gourmet with your best cheese, or you can use the broiler to simply make something good to eat at 500 degrees in less than 5 minutes.

Shameless zinester plug: Come read and make zines with me at ABC No Rio. The ABC No Rio zine library is open Tuesday, Wednesday and Thursday evenings from 6-9pm. I’m in on Thursday’s!

We were recently contacted by an organizer of the Pioneer Valley Zine Fest, which will be held from April 27-28th at Food for Thought Books Collective in stunningly gorgeous Amherst, MA. I (Kate) lived in Northampton for a couple different idyllic periods in my life, and as such am very excited about this brand new Western MA zinefest.