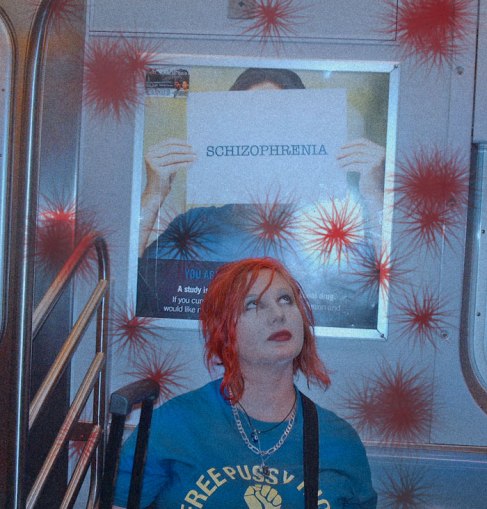 1. Kindly give us a short description of yourself and the work you do.

I’m an artist and experimental musician, primarily. I like to do a lot
of things. For a long time I was mainly doing minicomics, but the
zines I’ve been putting together lately are combination comics,
written commentary and photo-collages. I want all those elements to
flow together into the overall mood of the story I’m telling. I want
the “Living In La La Land” zines to merge a landscape that’s both the
external place where I am (New York City) and my personal
consciousness when going through the experiences I’m recounting.

2. How did you get introduced to zines? Were you influenced by anyone?

I can’t remember cuz I’m old (LOL). No, it’s hard to pinpoint because
it seems like zines were always around and part of what I was
interested in. You’d go into a record store and there would be a rack
of zines, primarily music ones but also more eclectic or personal
stuff that people had made and put in there on consignment. Same with
comic stores, there’d be a section for self-published minicomics in
the better ones.

I think anytime a person uses zines as a forum to explore ideas that
are important to or within the feminist movement, and adds their voice
to it, that’s feminist zine making. I think in mine the feminism
appears in a very implicit way. It’s autobiographical and therefore
has a “the personal is political” approach. In that way it encompasses
issues of feminism, or touches on issues regarding schizoaffective
disorder, physical disability, or issues with housing & the police and
such, and trying to live a creative life through it all because these
are the things my husband and I are dealing with. There are also some
less-than-glorious moments of conflict; there’s one page where this
very yuppie-ish woman shoved my husband out of the way to get to a
cab, which is very much ablism on her part, and I fly into an
“episode” and begin attacking the cab and calling her a
not-very-feminist word o_0. So you’re looking at this intersection of
ablism, mental health issues, and some of my own gender baggage coming
out in the heat of the moment. But it would have been disingenuous to
wash over that, to not look at where sexism can become internalized
even in someone who has consciously taken an interest in feminism.

I dunno, there’s a lot of good ones! I’m mercurial like that, my
favorites can change all the time and now with zines going through
this sort of resurgence, I’m sure there are a lot of good newer ones I
haven’t even seen yet. Then when you get into mail art, that’s a whole
other realm of the art world beyond zines. My friend Tamara, (who is a
great artist and also a feminist) participates in a lot of mail art
projects, there are people sending all these one of a kind things
through mail, all over the world. I think that movement started with
Fluxus, though it may go back farther. What I like about zines is
their freedom of style. They can be as raw or slick as the creator
decides. The subject matter and design of a zine doesn’t have to be
dictated by marketing trends or the interests of sponsors, or what’s
currently a popular opinion to hold.

A blender–it’s able to mix up multiple elements, it’s in turmoil, and
it makes noise and has blades. 🙂